My great grandfather, Jesse Benton Harris was a pioneer preacher and church planter.  I have always cherished this photo of Jesse Benton (standing in the water) about to baptize, some say the entire community of Posey.  If you blow up the image and look in the trees you see many people in the trees seeking to look over the crowd. There is also a tent structure in the background among the crowd, I suppose in which to change clothes? There are no leaves on the trees and many of the women have coats and hats, while others have none.  Some have speculated that all of those near the water without coats are about to be baptized in what had to be very cold water.  I don’t have any idea what Jesse Benton is looking at unless others are baptizing and he is preaching, leading and praying.  In addition to this photo, I have a copy of his handwritten ministry diary and several of his handwritten sermon notes.  I preached from his notes on one occasion and it was deeply moving to me.

He was born in 1853 and died in 1915.  He lived all of his life in the rural area around Trenton, Missouri.  When he was converted and called to preach he was illiterate.  His wife Mary would read the scripture to him and he would create the sermon and preach it from memory.  He was by all accounts a very powerful preacher.  In short order, Mary taught him to read and write and he became a Baptist missionary for the Livingston Baptist Association.  In that role, he went about planting churches throughout the countryside. In his handwritten journal, he wrote: “that 1892 was the most productive year, planting four churches and seeing over 200 baptized”. In total, he planted more than a dozen churches during his ministry. 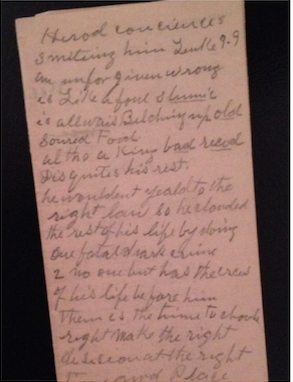 He was known for his boldness in preaching and church planting.  Take for example the often-repeated story of Calvary church in Posey.  The community of Posey was not a city but a collection of Kentuckians who arrived in North Missouri and found the one place filled with hills and hollows that looked like home.  They set up three businesses in those hills, lumber, gambling, and moonshine, and not in that order.  It was a wild place. Jesse planted a church there and as the photo shows the gospel had a major impact on the lives of the people.  As the people were converted it became clear that moonshine and gambling were no longer the cash crop in those hills.  My great aunt Fina born in 1896 would tell the well-known story about some young men who grew increasingly frustrated by the newfound morals of the community.  These young ruffians learned of the ongoing revival meeting led by Jesse in Posey and determined to interrupt it by doing something they had done at other churches.  They planned to ride their horses into the church house during the revival meeting.  That night as the eager group left nearby Jamesport a bolt of lightning followed by thunder startled one of the horses who threw off his rider.  The rider’s shotgun fired as he hit the ground and it literally blew off the young man’s arm. No one ever tried to interrupt Jesse’s revival service again.  From that point on the one-armed man in town was a visible reminder of God’s protection of the pioneer preacher.  Let’s just say when Jesse talked, people listened.

Each day when I glance at his photo, which is framed in my office along with some of his handwritten sermon notes I grow in my commitment to be as faithful in my generation as Jesse Benton was in his. I am reminded that the power and presence of the Holy Spirit that enabled Jesse is with me as well…even if I don’t have a one-armed man just to bring home the point.